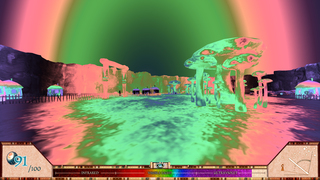 Just finished A Slower Speed of Light, a computer game in which simple relativity is explored - the (simulated) speed of light is slowed bit by bit.

As it does so, all sorts of relativistic effects happen (my favourite is the Doppler effect, but others are perhaps more interesting). Travelling sideways is particularly trippy.

It took me about 29 minutes. Well, in my frame of reference, it did. In the game’s universe it was a little over half an hour…

In a tangentially related musing, Sarah and I are currently watching The Killing Series III, in which (I don’t think I’m giving too much away) a kidnapper proves that their hostage is alive by posting a photograph showing the hostage with a newspaper front page. This is a commonly-used technique for proving the recency of an image: I’ve used it myself, although that’s a different story (I am not a kidnapper). I wonder if it would be possible to include something in a photograph that proved its age. A photo of New York showing the twin towers would probably convince me it was “pre-911”, but it’s not as incontrovertible as the newspaper technique. If there were some kind of entropic process that it was impossible to compute in reverse, but possible to compute forwards, a photograph of an early state of the process would work. Then again, I think that might be nonsensical: Newtonian mechanics works exactly the same if you reverse time…