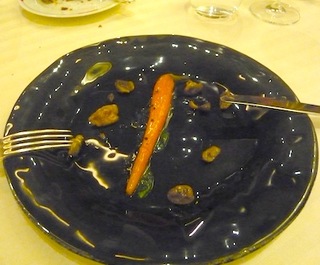 Memories are blurry. Asked to recall our earliest experience, most of us have vague recollections of some childhood incident. Facts, on the other hand, are sharp little points of knowledge. The Battle of Hastings took place in 1066. Alan Partridge’s middle name is Gordon. The capital of Kenya is Nairobi, and so on.

Try to recall your earliest memory that could be described as “factual”. I admit to being slightly unusual in this regard (in fact, I admit to being slightly unusual). Sitting in the back of my uncle’s car, on a traffic-retarded cross-London journey to catch a train to Warrington, I remember looking out of the window at a sodium-streetlit manhole cover and thinking to myself, “This is one of the most unexciting moments in my life. I wonder how long I’ll remember it.” Twenty years later, although it couldn’t be described as photographic, I can picture the moment vividly - if I’m honest, more vividly than a lot of my most treasured memories. Since they’re not actively repeated, some of my more valuable and important recollections end up with a “soft focus” effect when I try to call them to mind.

I put it down to a kind of unintentional spaced repetition. There’s an uncertainty principle that comes into play when you ask yourself, “I wonder how long I’ll remember x”: your observations affect the effect. Periodically testing your brain to see if the memory is still there has the effect of cementing it. Over the years, I’ve replayed my particularly mundane earliest “fact” enough to keep it fresh.

Families and groups of friends are good at social spaced repetition. In-jokes, (in)famous episodes, photo albums and “Hey, remember that time when…?” are all (too often repetitive) ways of reinforcing a shared memory.

Flashcard programs like Anki are great for learning facts. It strikes me that there’s no reason why they should be limited to pure facts. In Religion for Atheists, Alain de Botton points out the value of spaced repetition. He examines religions, whose calendars decree that their followers periodically return to sacred texts or repeat ceremonies designed to keep their memories, and their faith, fresh. de Botton then asks why a non-religious reader would find it odd to make “appointments” to re-read significant parts of a book they had previously found moving, or interesting. It occurs to me that this is probably less odd than using a program to memorise the Latin names of birds, for example.

So I am starting to experiment with flashcards for experiences (what we colloquially refer to as “memories”) and for skills.

Having just attended a baby/child first aid course, I’ll see how many of the skills can be turned into flash cards. Other skills amenable to spaced repetition might include knot-tying, mathematical proofs, puzzle-solving and (the actual carrying out of) recipes.

For memories, well, I’ll keep some of them private, but I think food, sound, photographs and videos will all be thrown into my “decks”. The image for this post shows the most remarkable carrot I have ever eaten. Those who were there with me will know what I mean!