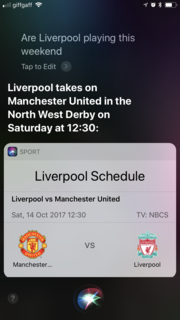 Spent an enjoyable few minutes watching a four year old barking questions at Siri yesterday evening. Iris is largely unimpressed with her reverse namesake. I guess because Siri has a name, and because of the way we mock-reverentially talk to Siri, Iris follows suit. She realises she’s not talking to a person, but she’s not quite got a sufficiently deep understanding to realise that some questions are just non-starters. So she quizzed Siri with:

“Hey Siri. What are you doing?”. Never gonna work.

“Hey Siri. Do something funny”. Fail.

Anyway, Siri gave us an opportunity to evaluate its (his?) understanding of something which Iris can actually talk a bit about. She is a Liverpool fan - or she thinks she is - so naturally she wanted to know what the Red Men were up to this coming weekend. “Are Liverpool playing this weekend” was understood perfectly, including inference of the correct meaning of the question, but the formatting and language in the response could improve (see image).

Weird that Siri knows about “the North West Derby” (good vernacular), and follows U.K. conventions when giving the date, yet uses “schedule” in this context and tells us that our fave team “takes on” (singular) their biggest rivals. Siri’s a bit confused about whether the match is at Anfield or Old Trafford, too. I’ll make sure to try and catch it on NBC. Thanks, Siri.

I would advise Apple to use this BBC article from a while back to improve their cost functions for AI training. I hope the real Reds offense enjoys some success in the hotbox and predict a two-zero slam-shot in the endgame.