In 2008 Sarah and I spent time volunteering in Eastern Australia, helping the Borgia research group to catch and study satin bowerbirds. These birds are awesome - I use the word deliberately. So much going on: incredible iridescent plumage, piercing violet eyes, peculiar sexual dimorphism (males look like females until later in life), highly intelligent and complex behaviour. The males build and decorate bowers and put on displays to convince the females to mate with them (their nests are separate). Males pretend to be females so as to observe their competitors' “dances”. Later, they steal treasures and flatten their rivals' bowers. And they scratch and bite when you catch them! We did it carefully, with training on handling, but they still were wriggly as anything. The fellow in the image below is WRR (white, red, red) and he was particularly difficult to catch: after a few weeks observing a group of the birds, it really felt like they had individual personalities (anecdata alert, I know). The bird in the image above is a female. Or then again, maybe not - even the birds have trouble working that out.

Anyway, I love Radiolab and their latest episode is a thought-provoking exploration of some controversial ideas about evolution. If you haven’t tried it, listen to Radiolab (episode: The Beauty Puzzle). 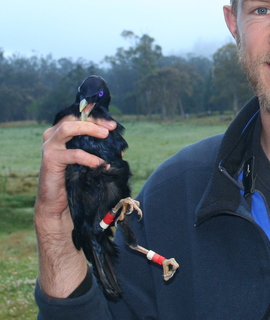